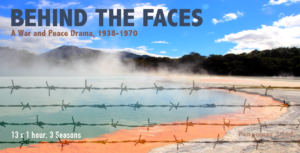 Behind the Faces – Series by Alan Duff

Three stories gradually converge: From America to New Zealand, the World War II battlegrounds of Crete and the Pacific, to a German P.O.W camp, a Japanese P.O.W camp.

Unlikely friendships and unions in war and peace.

In Mississippi, teenage Negro siblings Jess & Betty Hines witness a white mob tar and feather, thence lynch and burn a fellow Negro. Louis’ victory didn’t change a thing. Across the world in New Zealand, a couple walk through their thermally active village of Whaka in Rotorua, with their toddler daughter. Henry Takahe tells his wife he’s signed up for the war in Europe against Hitler.

At army training camp a white guy, Sam Hooper, becomes Henry’s best friend. In Egypt, their special stealth unit create minor havoc amongst Rommel’s troops. Crete the next battle ground. The Nazis conscript Max to humble paratrooper duty; a bad parachute landing on Crete breaks a leg. A large number of Kiwi soldiers are captured. Henry and Sam escape, on the run for months on a German killing spree. But they cannot kill teenage soldiers.

Jess, conscripted into the U.S. Marines, finds himself in New Zealand, a training camp for the Pacific

Campaign against the Japanese. Marines visit Whaka to see the thermal sights, showering locals with gifts and charm; show the women different dance steps. Jess meets Lena, wife of war-absent Henry Takahe. He’s sent off to fight in the steaming jungles of Burma. A child grows in Lena’s belly. 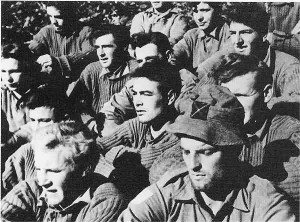 ecaptured, the Kiwi duo arrive to a POW camp lorded over by a bunch of London Cockneys led by a former boxer and criminal, Terry Hatton. Karl’s punishment for association with Schmeling is guard duty at the POW camp in Austria. Henry tries to bust up Terry’s rule and gets soundly whipped. Sam is next. Karl sets aside his racial views and teaches Henry how to box.

A new commandant shows a humane side. Most his staff do not like it, including Karl. The Inspector of Prisons is out to get Commandant Hauer fired. The regional Gestapo commander, Dieter Koch, wants him executed, the camp on minimal rations and under severe discipline. It will be revealed why Walter Hauer is so liberal.

In the jungles of Asia, Jess and his fellow black marines have two enemies: The Japs and their white compatriots. A bunch are taken captive.

ll on earth. Whites still despise blacks. Jess’s extraordinary dance and song routine so often saves his fellow POWs from certain death he wins the whites’ respect. His child back in Whaka, New Zealand, has his 1st birthday. His sister Betty is lynched by a white mob.

Life in the two camps are stark contrasts, along with Lena’s guilt- burdened life back in Whaka village. Three stories keep converging. Sam and Adele are in love. Koch packs Henry off to a notorious punishment prison. Three of his German captors, along with Sam, go and rescue him. First Japan then Germany surrender. Everyone goes their separate ways.

Season 1 ends and Season 2 has a new young hero dubbed “Yank,” the offspring of Lena and Jess. He’s musically gifted, with the ability to travel back in time to his Maori ancestral pasto another world revealed.