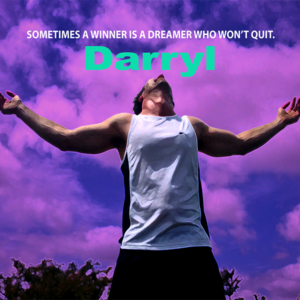 Darryl
Darryl, a failed marathon runner plagued with self-doubt, travels the Cook Strait on a ferry to get to Picton to begin an 8 day Adult Discovery Course at Outward Bound with a rag-tag bunch of other adults all on a quest for self-discovery.

Darryl Walker is a lost soul with a handlebar moustache.  An aspiring long distance runner, he recently missed out on finishing the 2014 Taranaki Mountain to Surf marathon after his pencil thin body succumbed to dehydration and he flailed around like a newborn foal before collapsing on the ground and into a long depression.  The YouTube video of his humiliating efforts has garnered almost 2 million hits and Darryl’s now a hit in his own right but for all the wrong reasons.  Ever since that fateful day, he has surrounded himself with lofty self-help books and videos in a frantic effort to return his mindset back to it’s former winning self.  Unfortunately, the results have been less than effective.  Now Darryl has heard about the iconic Outward Bound organisation, which has changed the lives and minds of over 70,000 Kiwis.  In a desperate bid to ‘sharpen the saw’, he has enrolled in an 8 day Adult Discovery course which he believes will help him acquire the necessary mindset to win the 2015 Taranaki Mountain to Surf marathon.

Making The Mars Rover 120′ special in 2 parts When NASA’s Kennedy Space Center challenged Marc and Shanon Parker to design and build a concept vehicle for a 2030 manned mission to Mars, they met with former astronauts and END_OF_DOCUMENT_TOKEN_TO_BE_REPLACED

Chef Messenger is a unique reality show packed with fun, emotions and of course some gourmet food!   Each episode captures the story of a protagonist who needs assistance to convey an important message to a loved one. A celebrity END_OF_DOCUMENT_TOKEN_TO_BE_REPLACED

Have you ever seen someone in the street with an outfit you love? Don’t you wish you could you could just stop them and ask “where did you get that?” or even better, get them to give it you? END_OF_DOCUMENT_TOKEN_TO_BE_REPLACED

Concierge is an extraordinary new reality series, available as 39 x half hour episodes, and also as an international format.   Around the world, there are those who exist in the highest echelon of incomes…the one percenters….and then there are END_OF_DOCUMENT_TOKEN_TO_BE_REPLACED