Gobbledygook is a studio based word game with a host, and 3 teams of 2 competitors who compete for the Grand Prize. Ideal for a celebrity panel who love to talk!

The object of the game is to take a simple word or phrases, then convey the same meaning but using as many words as possible. It sounds easy, but it’s difficult to do under pressure …

The players try to create an alternative description using the longest words possible. The game is scored using an average letter count. For example, take a screwdriver. It’s a tool. It removes screws, so “screw removal tool” is a good description. There are 16 letters in the three words, so the score is 16/3. It could also be described as a “screw manipulation device” giving 23 letters across 3 words, so the score is 23/3. The higher score wins.

There are three rounds to the game and players must write their answers down.

In Round 1, Single Words, each player gets 20 seconds to come up with their longest alternative way of describing each word. 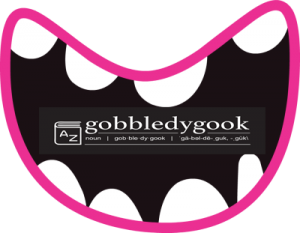 In Round 2, there is a two word phrase like “Fat Cat.” It can become “dangerously obese domesticated feline” 34/4 average letter count, 8.5. The rules are the same and the team have 30 seconds to come up with an answer.

Round 3 is the final round, and the winning team is playing for prizes which are only given for average letter counts of 8, 9 or 10.

There are a few simple rules! You can’t use proper names. The words you use must describe the words in the question. It’s OK to use “the” “and” or “a” but they count as one word and bring the overall average letter score down. As the players must write their answers down, they have to be able to spell.

The Expert
The show has an expert adjudicator, who has credentials in English or the language of broadcast, and an excellent vocabulary. In addition to adjudicating on answers, the expert must be able to come up with his or her own answers that rival or beat the competitors.

The Host
The host will introduce the questions and competitors, as well as explain the rules of the game. He or she should also have good rapport with the Expert.

Making The Mars Rover 120′ special in 2 parts When NASA’s Kennedy Space Center challenged Marc and Shanon Parker to design and build a concept vehicle for a 2030 manned mission to Mars, they met with former astronauts and END_OF_DOCUMENT_TOKEN_TO_BE_REPLACED

Chef Messenger is a unique reality show packed with fun, emotions and of course some gourmet food!   Each episode captures the story of a protagonist who needs assistance to convey an important message to a loved one. A celebrity END_OF_DOCUMENT_TOKEN_TO_BE_REPLACED

Have you ever seen someone in the street with an outfit you love? Don’t you wish you could you could just stop them and ask “where did you get that?” or even better, get them to give it you? END_OF_DOCUMENT_TOKEN_TO_BE_REPLACED

Concierge is an extraordinary new reality series, available as 39 x half hour episodes, and also as an international format.   Around the world, there are those who exist in the highest echelon of incomes…the one percenters….and then there are END_OF_DOCUMENT_TOKEN_TO_BE_REPLACED