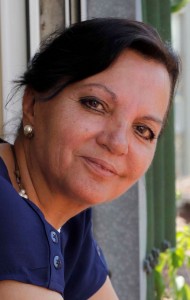 Solmaz Kamuran was born in 1954 in Istanbul. She graduated from Istanbul University, Faculty of Dentistry. Her first translations of literature and interviews were published when she was 17 in a weekly magazine “Yansima.” Throughout the years when she was practicing dentistry, she did not lose her interest in and love of literature. Finally she left the profession and devoted herself to her writing career.

Her first book was published in 1997 and is called “Intoxicated Transparency.” Her second book is a biography of the famous Turkish writer and columnist Cetin Altan, “Murder of a Silkworm” (1998)

In 2000 her first novel “Kiraze” was published and had great success in Turkey selling more than 100.000 copies in 17 editions. “Kiraze” is the saga of a Sephardic Jewish family that was forced to emigrate from Spain to Turkey. In 2003, Kamuran was among 20 writers invited by the Sorbonne University to a conference on Sephardic Jews and literature.

Her second novel “Minta” was published in the beginning of 2002 and has also made six editions. “Minta” is about five generations of an African family separated by slavery and haunted by struggle and tragedy. The separated family ends up living in Turkey and the USA. Kamuran tells the story through the eyes of a “caretta caretta” (loggerhead sea turtle) whose migration route is between Turkey and Florida.

“Phosphorescence of Night,” published in 2002, is a collection of her essays that were previously published on the internet, essays about Istanbul, life in the city, Kamuaran’s childhood and memories of her youth.

Kamuaran’s novel “The Bank” was published in summer 2004. The story brings together a former leftist militant (who lived for many years in Europe as a political refugee), an old but still ambitious woman (the widow of an officer), a teenage boy with many personal problems and a high temper. and a transsexual who once lived in Paris. They live in a normally quiet. tolerant little Mediterranean town, but within twenty-four hours the whole place is driven to acts of madness by news of a catastrophic economic devaluation. The novel unfolds as the main characters are held hostage in the town’s bank.

Other notable novels are “Macar,” or “The Hungarian,” a novel that begins at the end of the 17th century and sweeps through the 18th… It is a story of a young, brilliant Hungarian who is driven from his motherland by the harsh, deadly storms of the power wars of Europe and finds himself in İstanbul, in the midst of the Ottoman court. Against the odds this convert never loses his passionate will, to establish a printing house…and he becomes the first man to bring the printing process to the Empire nearly 300 hundred years after its foundation in Europe.

Solmaz Kamuran is also a well-known translator of literature, with works including:
“Sofia” / Three book series by Ann Chamberlin,
“Harem” by Colin Falconer,
“The Beauty of the Purple”, by William Stearns Davis,
“La Cucina” by Lily Prior,
“Nectar” by Lily Prior,
“Ardour” by Lily Prior
“Cabaret” by Lily Prior
“The Song of Troy” by Colleen McCullough.
“Hunting Midnight” by Richard Zimler
“Middle Sex” by Jeffrey Eugenides, “Breakfast with Captain June” by June Haimoff is in the process of being translated.

Solmaz Kamuran has written scenarios for TV series and her travel notes have been published in several newspapers and magazines. Kamuran is also the editor of Cetin Altan’s books.